The following attractions no longer exist, but they are a big part of Colorado Springs’ tourism legacy.

Antique Car Museum – On 21st Street.   The building is now a bingo hall, on the right as you start to ascend the hill.

Hall of Presidents Wax Museum – Behind and to the right of the Antique Car Museum on 21st Street.

Buffalo Bill’s Wax Museum – This building is now the Blue Skys B&B next door to the Briarhurst Manor.   It was dusty and all the wax figures had the same close-set eyes.  From a kid’s point of view, it was the best layout for a wax museum that I have ever seen because it had real dirt on the floor, stuffed horses and it was a trail winding through one big warehouse sized room.

Miracle House – A gravety defying miracle!   OK, it was a walk through a tilted structure.    This was on the south side of Colorado Avenue, just prior to entering Manitou Springs.

Zoo Park –  There is nothing left of this zoo and good size amusement park.  It was very near where the Harlan Wolf Ranch located at 915 W. Cheyenne Road.  This historic ranch is free and open for exploration with a demonstration garden by Pikes Peak Urban Gardens.

The Mountaineer – A miniature cog train that ran from the Broadmoor Hotel to the Cheyenne Mountain Zoo.   It’s gone, but enough is left and is interesting enough that it has its own page, anyway!     See the Mountaineer page on this website for much more information.

Van Briggle Pottery was located inside the old Midland roundhouse on the corner of 21st Street and Highway 24.   It occupied the entire roundhouse and was removed just a few years ago.  Now occupied by Colorado Mountain Brewery and several other businesses, it is still an interesting old building to explore.   The exterior of another very interesting Van Briggle building can be explored on Uintah Street, just east of Interstate 25.

The Clock Museum – Opened in 1968 and closed in the 1980’s, The Clock Museum stood at 21st and Bott Avenue. Boasting the world’s largest pendulum clock weighing 2,200 pounds with a 300 pound pendulum and 32 feet high. It also had an underwater clock that used rubber ducks as a display device as well as a vast assortment of traditional clocks. (This information came from a Gazette-Telegraph article 7/11/1983 and a tip from a reader of this blog.)

Manitou Springs Bath House –  Still there in a new incarnation next to the Manitou Penny Arcade.    Did you know that Col. Chivington , infamous for the Sand Creek Massacre, was an investor?  This man taking the spring from the natives brought a well publicized curse from the tribe onto the building.

See the Garden of the Gods section of this website.

High Point Camera Obscura – A large rotating lens projected onto a concave screen.  The lens rotated 360 degrees with a descriptive narration as tourists stood in a dark room looking down onto the screen.  Removed in 1993, just the parking lot is left, but the 360 degree view remains!   At the top of Ridge Road in Garden of the Gods.  Take the 35th Street exit from Interstate 25. 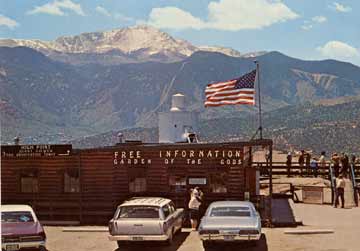 Also visit the Garden of the Gods section of this website.

The Mineral Springs of Colorado Springs.  It is an incorrect assumption that Colorado Springs didn’t have natural mineral springs, relying on the springs of Manitou for promotion.  Surprise!

The Tahoma Springs gazebo was destroyed in the 1935 flood, but if you know where to look, the fountain is still there.  A local group is looking to restore it.   EXPLORE!  Start at the swimming pool in Monument Valley Park.   Walk south along the trail next to the creek.  Before you get to the foot bridge, on your right you will see this stone pedestal of the old mineral springs still sitting in the center of the octagonal foundation for the gazebo.

Buckskin Joe – Our most recent loss.   Ghost town buildings purchased and reassembled. for a movie set and tourist attractions.  Recently purchased by a wealthy individual and relocated to his private land.

Royal Gorge Railroad – Also recently lost.  (The small one by Buckskin Joe.)   The engines were powered with Chrysler engines from the 1950’s.  The tracks and viewing platform are still in place.

I know there were more.   Help me out, here!

3 thoughts on “Attractions of the Past”