North Cascade Avenue is a road of prominence rivaling the locally legendary Wood Avenue for historic mansions.   It then crosses Fillmore Street and unceremoniously dead ends after a few blocks.

North Cascade Avenue used to extend almost as far as Rockrimmon, believe it or not.  This is where the mysterious bridge comes in.  The decaying bridge sits in a long forgotten location between Nevada Avenue and Mark Dabling Boulevard.

Explore:   This concrete bridge can still be found, hidden and forgotten.  On a tight curve of Mark Dabling Boulevard, between Fillmore Street and Garden of the Gods Road, locate the dirt mounds that make up a bicycle jump area.  ( It does look like fun, doesn’t it?)  Park and access the bicycle trail behind these jumps.   You will find this bridge over Monument Creek.   The eastern end of the bridge runs into an impressive hillside of fill dirt so you will need to use your imagination and a map to see how it once connected to North Cascade Avenue.    Not much to see, it but another piece of hidden history that we find interesting. 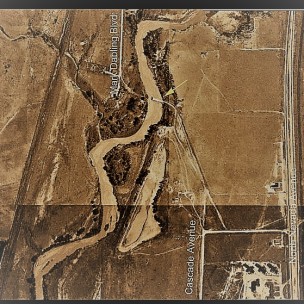 In the photos above, you can see how Cascade Ave and Mark Dabling Blvd still have some of the alignment left from when they joined as a dirt road using the “Mysterious Abandoned Bridge”.

Photos of this area in the 1940’s shows that the east end of the bridge was already missing.  I’m guessing it was lost in the flood of 1935 that took out most of the bridges in Colorado Springs.

One thought on “The Mysterious Abandoned Bridge of Goose Gossage Park”