After the workout on the incline, most hikers turn left and head back down Barr Trail.   Not you.  Let’s explore!

Explore!  Before you start your ascent, see if you can spot the passenger loading area in the parking lot below.  It is filled in now, but the shape of the loading area is still there, as well as the bases of the iron beams that held up the roof.    The car would end in a pit that allowed the passenger to step directly into the seating area.  The metal edge of the loading pit is still clearly visible.    OK, meet you at the top.

On the way up, notice how the ties are double wide half way up.   There were two cars, joined by a single cable.   The top half had to be wide enough to pass, while the bottom half only needed to handle one car at a time.   A thought to ponder while climbing:  Why three rails at the top, 4 rails in the middle and 2 rails at the bottom?     The 4 rails were the passing point.  Only three rails were needed on the top half, as the center rail could be shared, due to the cable from the other car being close enough to touch!   Only two rails were needed below the passing point.

Once you reach the top of the incline take a break, take a selfie, hydrate, enjoy the view and congratulate the hikers arriving behind you.

This is where the “Exploration Beyond The Attraction” begins.  To your left is the foundation of the caretaker’s home.  Straight ahead is the foundation of the hoist house.  You can still see the mounting for the machinery.  You can see this Manitou Incline’s hoist in action in this 1936 YouTube video!   To your immediate right would be the snack bar and gift shop.  Follow the trail behind that, to your north, to the foundation to the old restrooms.  Near the restroom foundation is an old water tank from the side of a Cog Train steam engine!   Also nearby are picnic tables built from iron railroad rails.   Now aren’t you glad you explored?

Don’t stop now; there is so much more to experience.   Do you have enough water?   Then let’s explore!  You will be leaving the masses, so be prepared.

Next, return to the hoist house at the top of the incline. Follow in the direction that you were climbing on t 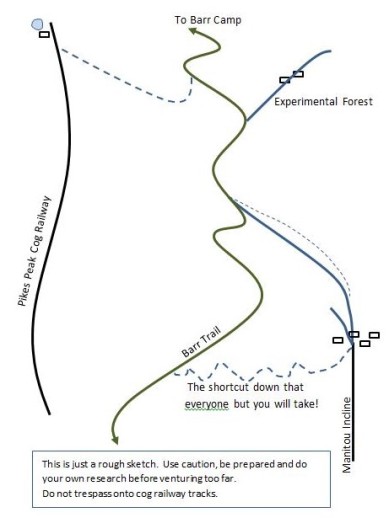 he incline and continue straight ahead.  The trail forking to the left dead ends at the water pipe that the incline was built for in the first place.  Take the dirt road that forks to the right that continues up hill.

This road is paralleled on the right by Fred Barr’s original trail.  It will pass under a huge flat boulder that isn’t quite tall enough to stand up, but a nice photo-op.  Continue along the road or the trail to end up at a junction with the Barr Trail.  Aren’t you glad you don’t have to back track?  This is your way down.  But you know that I have more exploration for you!

There are old iron signs with directions and distances.   The distances are not correct, but close enough for the pre-GPS crowd.  Go to your right.  Very soon you will meet another fork in your road.  To the left is Barr Trail to the summit of Pikes Peak.   To the right is the remains of the buildings that made up the old Manitou Experimental Forest.  This road will continue to Ute Pass across the street from the closed Waldo Canyon parking lot.   From here you may take the Ute Pass Trail back to Manitou Springs but be prepared by researching the route, first.  You can not safely go down by following Highway 24.  I tried that and it doesn’t work.

From the Manitou Experimental Forest, go back to the junction with Barr Trail.  Take a break on the great old log then take the trail to the left towards the summit.  Not too far beyond this junction on this trail, you will see the faint track of a trail leading off to the left.   A bit more advanced and adventurous, this trail is on top of a water line that leads to the cog train tracks and the reservoir and caretaker’s home that sit next to the tracks.  The tracks and reservoir are private property of course.

This is just a rough sketch.  Use caution, be prepared and do your own research before venturing too far.  Do not trespass onto cog railway tracks.

4 thoughts on “Beyond the Mount Manitou Incline”